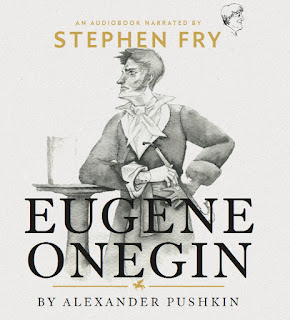 We've all received an education
In something somehow, have we not?
So thank the Lord that in this nation
A little learning means a lot.
Мы все учились понемногу
Чему-нибудь и как-нибудь,
Так воспитаньем, слава богу,
У нас немудрено блеснуть.
Onegin was, so some decided
(Strict judges, not to be derided),
learned, if pedantic, sort.
Онегин был по мненью многих
(Судей решительных и строгих)
Ученый малый, но педант:
He did possess the happy forte
Of free and easy conversation,
Or in a grave dispute he'd wear
The solemn expert's learned air
Имел он счастливый талант
Без принужденья в разговоре
Коснуться до всего слегка,
С ученым видом знатока
And keep to silent meditation;
And how the ladies' eyes he lit
With flashes of his sudden wit!

BBC Radio 4 IN OUR TIME- Melvyn Bragg and guests discuss Alexander Pushkin's verse novel, the story of Eugene Onegin, widely regarded as his masterpiece. Pushkin (pictured above) began this in 1823 and worked on it over the next ten years, while moving around Russia, developing the central character of a figure all too typical of his age, the so-called superfluous man. Onegin is cynical, disillusioned and detached, his best friend Lensky is a romantic poet and Tatyana, whose love for Onegin is not returned until too late, is described as a poetic ideal of a Russian woman, and they are shown in the context of the Russian landscape and society that has shaped them. Onegin draws all three into tragic situations which, if he had been willing and able to act, he could have prevented, and so becomes the one responsible for the misery of himself and others as well as the death of his friend.
With
Andrew Kahn
Professor of Russian Literature at the University of Oxford and Fellow of St Edmund Hall
Emily Finer
Lecturer in Russian and Comparative Literature at the University of St Andrews
and