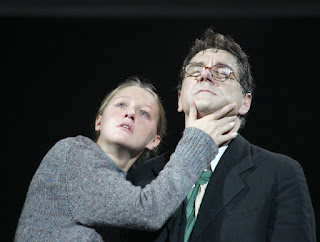 based on the play Uncle Vanya by Anton Chekhov

Crystal Turandot Awards winner (“Best performance of the season 2009-2010”)
International Stanislavsky Theatre Awards winner, 2010
The Union of Theatre Workers of Russia annual awards winner (“Hit of the season”, 2010)
Russian Festival of Performing Arts “Golden Mask” award winner (“Best performance of the year” 2011).
The première took place on 2 September 2009
Don’t be surprised if, on going to the Vakhtangov Theatre to see Uncle Vanya, you don’t recognize the familiar characters or if well-known lines take on a different connotation. No, Rimas Tuminas hasn’t committed an act of vandalism, he has not re-written the text, nor has he abridged it. He just sight-read it as if unaware there had been interpreters before him. There is nothing usual, beautiful, familiar. This is not the Chekhov we expect: there is no country house surrounded by garden, no cosy armchairs, table laid for a meal with lace cloth and bubbling samovar, no atmosphere of a family home in which several generations have lived….What we are given is an empty space from which life has departed, a theatre space with grey slips, a plaster of Paris lion – a symbol of Petersburg, perhaps the ancestor who built the house came from there, a workbench made out of rough boards, an old sofa, several chairs of different colours…
The director has freed the stage of the trappings of domesticity, leaving a battle field for passions, broken illusions, dashed hopes.
As seen by Tumanis and brought to life by the actors, Chekhov’s characters live in a world of colliding ambitions, of philosophizing, bouts of hard work and inertia, they are both givers and takers. They are so different and yet so alike – they are all failures. Why? We will look into this at a leisurely pace, from scene to scene, dialogue to dialogue, quarrel to quarrel, investigating moments of coming clean and moments of dissipation.
Chekhov’s work has been seen as a forerunner to the theatre of the absurd. His characters say one thing, do something else and think something totally different to what they say and do. Tuminas’ Uncle Vanya is about what Chekhov’s characters think and what they admit to only at moments of emotional turmoil. They are at times tongue-tied, like Uncle Vanya, or over-brutal like Astrov. But their revelations break out of them frenetically, just as a man breaks out of a stuffy room into the open air.
Director and cast love their characters, who are so different, lonely, at times so ludicrously absurd. Yes, absurd.
Anton Chekhov referred to all his plays as comedies. Directors and audiences found it hard to understand why these stories full of suffering, understatement, always ending on a hauntingly sad note – were comedies. This is not the first time Rimas Tuminas has produced Chekhov, his The Three Sisters and The Cherry Orchard won him acclaim from public and critics. For him, these plays by a remarkable dramatist represent a field for experiment, for probing to the bedrock, a justification of the genre.
Each production by Tuminas brings him closer to the meaning of this enigmatic word comedy, which is so contradictory to the context of the plot. Here Pushkin’s words are apposite: “High comedy is not based solely on laughter, but on development of character and…often comes close to tragedy”.
Автор: Prml.tk на 23:36