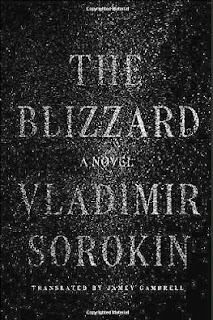 Русско-английские mp3 разговорники и аудиокниги
Russian-English Audiobooks-VK Playlist
From The Blizzard by Vladimir Sorokin - rus-eng parallel text-mp3 podcast.mp3
pdf+mp3
After a heated debate, and a tie between Vladimir Sorokin's "Blizzard" and Maria Stepanova's "In Memory of Memory"—broken by our esteemed jury via secret ballot—the NOS Literary Prize winner of the decade is ... Sorokin's "Blizzard!"

Vladimir Georgiyevich Sorokin (Russian: Влади́мир Гео́ргиевич Соро́кин; born 7 August 1955) is a contemporary postmodern Russian writer and dramatist, one of the most popular in modern Russian literature
Day of the Oprichnik, describes a dystopian Russia in 2027, with a Tzar in the Kremlin, a Russian language with numerous Chinese expressions, and a "Great Russian Wall" separating the country from its neighborsMetel' ("The Blizzard"). Farrar, Straus and Giroux, 2015. (English translation by Jamey Gambrell.)

‘The Blizzard,’ by Vladimir ­Sorokin- The New York Times-

Russians have been trying, and failing, to make their way through blizzards for as long as they can remember, or at least as long as they have been writing. The perilous-voyage-through-the-snow novella might be the Russian corollary to the American road novel. Vladimir ­Sorokin, Russia’s most inventive contemporary author, has written one too, and called it “The Blizzard.” His book alludes to every Russian literary portrayal of snow-­threatened travel, from Alexander Pushkin’s “The Captain’s Daughter” to Alexander Blok, who wrote dozens of poems starring blizzards

The protagonist of Sorokin’s “The Blizzard” is also a doctor, 42 years old, a pince-nez-wearing divorcé, unhappy, flawed, self-absorbed, well intentioned and ready for self-sacrifice in all the classic ways of the Russian intelligentsia, or its male representative as depicted in the Russian novel. The doctor must get to a village that has been struck by a deadly epidemic. Deadly in this case means that the virus turns its victims into zombies; it is transmitted, naturally, through human, which is to say zombie, bites. The accursed village is not remote — in good weather. But there is a blizzard. Only the doctor has the vaccine. So he ventures, recklessly, into the snow.

the vehicle that will carry the doctor is not a sled but a sled­mobile, a 50-horse-powered one. Meaning, it will be pulled by 50 little ­horses (similar terms are italicized in the book), each one no bigger than a partridge. With this description, on Page 14, Sorokin breaks with Russian rural hyperrealism: The world he is describing is not exactly the past.

The doctor may be carrying a vaccine that is effective against the zombie plague, but the rest of his kit seems to be decidedly last century. Toward the end of this short book, Sorokin narrows his time frame: The characters had great-grandfathers nostalgic for the Soviet era. This dark future that is the past is, it would appear, Russia’s present.

In this universe that is not only premodern but also postmodern, there are, in addition to the little horses, big horses and little people and big ones. Little people are about as tall as a samovar and get drunk by gulping vodka out of a thimble. A big horse is about the size of a three-story house, and strong enough to pull a whole train of multicolored cars — an important means of transporting goods and people in this postindustrial age. Though class divisions in this world appear rigid and economic gaps unbridgeable, people of all sizes seem to exist in peace, mutual cooperation and intermarriage.

Sometimes, however, the difference in scale can prove hazardous — as when the sledmobile collides with a giant dead body on what used to be, before the snow, a road.

In an outsize reference to yet another Russian classic, the doctor and his driver have to ax their way out of the frozen nose. They soldier on, but these Russian driving-through-the-snow stories never end well.