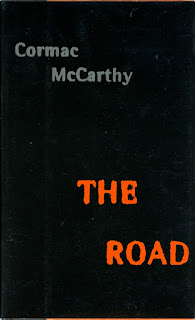 Русско-английские mp3 разговорники и аудиокниги
Russian-English Audiobooks-VK Playlist
The Road by Cormac McCarthy-chapter 1- rus-eng mp3 podcast.mp3
Русско-английский параллельный текст-глава 1-pdf
+ полный текст на английском-epubhe Road is a 2006 post-apocalyptic novel by American writer Cormac McCarthy. The book details the journey of a father and his young son over a period of several months, across a landscape blasted by an unspecified cataclysm that has destroyed most of civilization and, in the intervening years, almost all life on Earth. The novel was awarded the 2007 Pulitzer Prize for Fiction The book was adapted to a film of the same name in 2009.Entertainment Weekly in June 2008 named The Road the best book, fiction or non-fiction, of the past 25 years and put it on its end-of-the-decade, "best-of" list, saying, "With its spare prose, McCarthy's post-apocalyptic odyssey from 2006 managed to be both harrowing and heartbreaking."On November 5, 2019, the BBC News listed The Road on its list of the 100 most influential novels
A father and his young son journey across post-apocalyptic America some years after an extinction event. Their names are never revealed in the story; they are simply called ”the man” and “the boy.” The land is covered with ash and devoid of life. Realizing they cannot survive the winter, the man takes the boy south along empty roads towards the sea, carrying their meager possessions in their knapsacks and a supermarket cart.